(by way of The Poetry Foundation)

In keeping with our celebration of the work of Sagetrieb, and with the recent release of Lisa Jarnot’s biography Robert Duncan, The Ambassador from Venus and the publication of The Collected Early Poems & Plays, it seemed apt to look back at the special issue of Sagetrieb 4.2-3 (Fall/Winter 1985) which was dedicated to the life and work of Duncan. Contributing authors included Robert Creeley, Ronald Johnson, George Butterick, and many others.

In addition to remembrances of, essays on the work, and what were then unpublished documents by Duncan, this issue included an interview conducted by Michael André Bernstein and Burton Hatlen. We find in this interview Duncan, near the end of his life, speaking openly of the many strifes and trials undergone by him and his fellow Black Mountain poets in the name of poetry. He also speaks at length about his writing process, and in the selection below he speaks directly about the collage method learned from his lifelong partner Jess Collins:

RD: Certainly the collage method is how I saw Pound. Well, when I say “certainly,” I think Pound didn’t see himself using the collage method. There is a good deal of the reincarnation method in The Cantos. Collage is not reincarnation: it is the fact that everything is in the universe so you know that way out beyond your understanding of it everything has a harmony and I don’t think that is something Pound ever . . . nor do I, either, surely none of us do, have a full picture at the present moment. [. . .] Let’s say we’ve got a photographic level which is always very important but I think that photographic level leads to other levels of the spirit.

Later Duncan talks too of the strong influence (or counter-influence) of Pound on his own line and syntax:

RD: When I sent Heavenly City, Earthly City to Pound, he wrote back and said, “Why do you still have to go through that? I thought I went through all that, and you would never have to do it.” And yet in my talks with Pound, the one thing I wanted test him on . . . I knew that he had rejected Finnegans Wake with disgust, absolute disgust, and I knew why but I wanted to ferret it out. Because where Pound has an uncompromised line, I have a constantly compromised line and finally break syntax so that there’s not even a commitment to syntax, and that means every phrase can be compromised by the coexistence of other phrases.

In Sagetrieb 9.1-2 (Spring-Fall 1990), in response to an interview with Denise Levertov, Robert Creeley corrected some misstatements on Levertov’s part regarding his early response to William Carlos Williams, The interview was conducted by Terry Crouch, my colleague at the University of Maine, and was published in the previous number. Here is the passage at issue:

Crouch: Creeley said that he . . . based much of his early style on Williams, and then was amazed when he heard Williams read and found that he didn’t pause at the line-breaks.

Levertov: I have something to say about that. I don’t know when Creeley first heard Williams read, but the recordings, I think, all post-date his first stroke. And that must be taken into account because he no longer had complete control. I don’t think that Creeley heard Williams read much before I first met Williams, because he hadn’t met Williams more than a year or some months before I first met him, I’m pretty certain. And at that time Williams didn’t have much control of his voice. He paused involuntarily, and had difficulty getting to some words. The other thing is, and you can only take my word for it, because there aren’t any living witnesses, but when I would read, at his place, poems of his own to him, Williams fully approved of the way in which I read them, and I always read them paying strict attention to line-breaks. And so I would really take issue with Bob about that.

The involuntary pausing that Levertov mentions would seem to indicate, if anything, an increased attention to the line break. But whatever; his style of reading can be discovered on one’s own from the recordings at PennSound. Williams suffered his first stroke in 1951; there are recordings of “To Elsie” from 1942, 1945, 1950, 1950, 1952, 1952, 1954, and 1955 (follow along with the text). PennSound has also collated before and after readings of “This Is Just to Say” and “The Red Wheelbarrow.”

Creeley’s letter to the editor identifies the 1942 reading as the crucial one for his reception of Williams, and he singles out the performance of “The Wind Increases” as the formative one for his poetics. The full response is reproduced below. 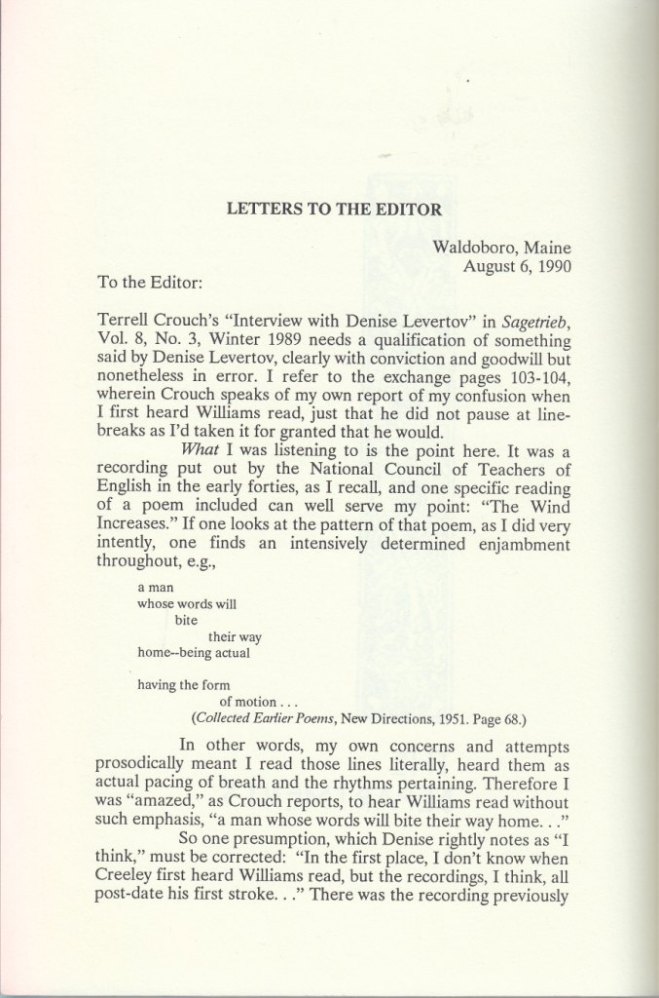 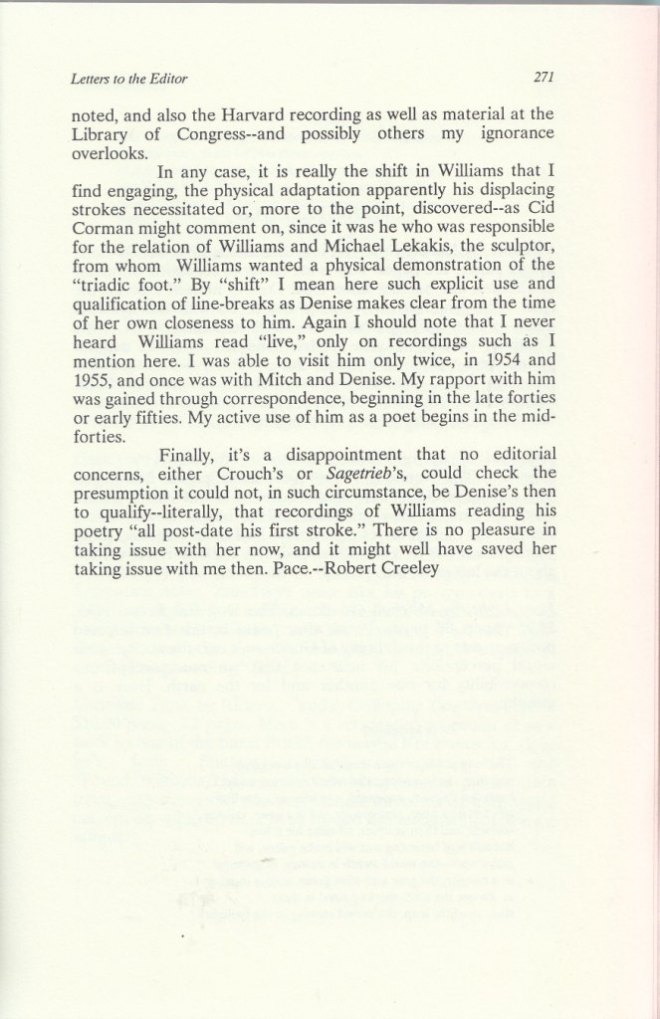 Cover for the first issue of Sagetrieb, Spring 1982

Our next publication, about which more news will soon follow, is a Festschrift for the late Burton Hatlen, guest edited by Demetres Tryphonopoulos, combining Paideuma 40 and Sagetrieb 20. The latter journal has been dormant for several years, its planned last issue left languishing when Burt fell ill; but Sagetrieb deserved a better conclusion than this mere petering out, and we are pleased that our celebration of Burt’s life and work will include a version of his last editorial project: a collection of essays on George Oppen. The Festschrift also includes an essay on Sagetrieb by Kaplan Harris, acknowledging the good work performed by the journal and the end of the era in which that work was performed.

In the coming weeks, as we await the arrival of the Festschrift, we will celebrate Sagetrieb by noting some highlights from the issues. Their tables of contents and covers can be seen at our Sagetrieb blog (link).

This celebration of Sagetrieb will be informal and improvisational, ranging freely across the run of the journal in no particular order — we’ll be pulling issues off the shelf at random, so to speak. But to get things started, here are a few choice sentences from the inaugural issue, from the section titled “The Biographer.”

Like Olson he wanted to play teacher and critic to me. And as with Olson — I balked. It has simply been a thing with me to do my own dirty work.

He wanted to be used the way he liked — with advance warning. He wanted what he wanted in the way he wanted. I bet his mom spoiled him.

Grattan Freyer, from “Montale and His Friends”:

On one occasion it was announced at the Giubbe Rosse that everyone would take the day off and go for a walk in the country. I pictured a twelve-mile hike at the very least. We walked, six or eight of us, about three-and-a-half miles out of Florence to a little country inn, where we all ate an enormous meal in the open air. The conversation en route to the inn was about what we would find to eat there, and on the way back about what we had eaten.

Freyer’s essay ends with two translations, one of Montale made with the poet’s help, a lovely version of “Eastbourne”:

“God save the King” intone the trumpets
from a pavilion erected on piles
which line the passage of the sea as it rises
obliterating footprints
of horses in the wet sand
of the shore.

Coldly a wind assails me,
but a shimmering lights up the windows
and the whiteness of mica in the rocks
glistens.

BANK HOLIDAY . . . The long wave of my life
slides back
escaping, too sweetly, declining.
It grows late. Noises fall apart,
closed in softness.

They go in bath-chairs the mutilated,
accompanied by long-eared dogs,
children unspeaking, or dotards. (Perhaps
tomorrow all will seem a dream.)
And you too
will come, prisoner voice, liberated
spirit wandering,
bleeding voice, lost and given again
to my evening.

As a hotel-door revolves on its sections
brilliantly
— another responds with returning beam —
a merry-go-round enthralls me, which overturns
everything within its circle. My homeland!
I listening recognize your breathing,
I too stir myself and the day is thick with living.

Everything will seem in vain: even the power
which in its blinding flux brings together
the living and the dead, the trees and the breakers
and unwinds itself from you, for you. the holiday
has no pity. The band
blares out again while in the early darkness
a grace unfolds itself unarmed.

Conquering evil . . . The wheel does not rest . . .
You also knew about it, light-in-darkness.

On the burning land, whence you are
vanished at the first stroke of the bells, remains
only an enormous burning brand for what once was
BANK HOLIDAY.