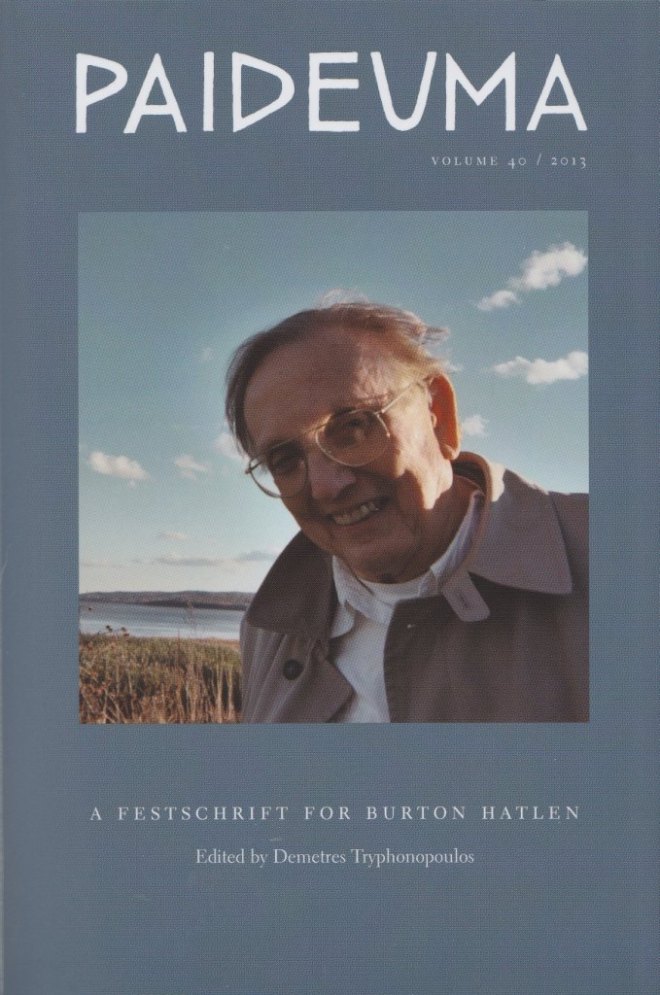 We are long overdue in announcing the combined publication of Paideuma 40 and Sagetrieb 20.

Information for ordering copies of the journals can be found HERE.

In the present volume—simultaneously published as Paideuma 40 and Sagetrieb 20—the National Poetry Foundation’s two journals are are joined in their labor for the first time within a single cover, in celebration of the late Burton Hatlen, Sagetrieb’s longtime editor.

Find below an excerpt from our editor’s preface to the current volume:

The testimonials and essays that follow only begin to indicate Burt’s enduring influence on his former students and surviving colleagues. Edited by his longtime friend Demetres Tryphonopoulos, the Festschrift is further enriched with a version of Burt’s last editorial project: a selection of essays on George Oppen. At the time of his death, Burt was shaping these essays into a sequel to his own George Oppen: Man and Poet (1982), a foundational collection, a few of whose contributors also appear here. In his introduction to that vol- ume, Hatlen summed up his editorial perspective nicely—words well worth recalling in the context of this Festschrift: “If criticism is (as I believe) a dialectical mode of discourse, then disagreements such as those which appear in this volume should be welcomed as opening to further critical work. In any case, my goal here has been to let a hundred voices sing.” With the present volume, Sagetrieb now ceases publication. Burt helped to plan this conclusion and he hoped to see it through; his gathering of new essays on George Oppen was intended for the final issue. The work of the journal will continue, however, as it has for the past half-decade, within the pages of Paideuma, whose expanded man- date since volume 35 has covered all poetry in English from the twen- tieth and twenty-first centuries. Yet despite this continuity, the end of the journal will be met with sadness by the scholars it long served, who will remember a time when no other venue was available for their work. That the situation is so greatly improved makes the discontinu- ing of the journal a bittersweet sign of its success. Today, serious study of H.D., Marianne Moore, William Carlos Williams, the Objectivist poets, the language writers, and other once-marginal individuals and groups can be found in a broad range of journals, including the most prestigious in our discipline. Within this new environment, the main- tenance of two journals, never easy, ceased to be necessary. Moreover, the division of subjects between the two, ever evolving, had become quite fuzzy in recent years, fuzzy enough to make a combining of efforts logical as well as thrifty. Our decision to end Sagetrieb (unofficial for some time, as no new issue has appeared since 2006) was difficult to reach, but seems inevitable in retrospect.