Steven Fama left a comment yesterday that I thought to bring front and center. He’s referring here to the Larry Eigner text on the cover of Sagetrieb 18.1 and also to my transcription of it (both are reproduced in the previous post):

to what degree should we, in reading the typescript (or transcription thereof), add to Eigner’s shorthand and (more importantly) correct his typos?

In the first set of lines in the pictured text, I want to read “from” for “frm” and correct “weiting” to “writing.” And similarly near the bottom, I read “people” for “pple,” “glimpsed” for “glimsed” and “emphasis” for “emphasos.” And yet there’s the puzzling “unreacjanle”

There are maybe three dozen odd (not in the dictionary” words in The Coillected. for many, the endnote for the particular poem indicates that the word is intentional, based on margin notes by Eigner or other matters.

For other odd words, however, there apparently is no information. The poem of course is what it is; the question is what should we as readers do — how far to insert, given Eigner’s habit of typing in shorthand and not always accurately (for the record, I am a worse typist).

(I have a particular poem I am thinking about, and will probably write about, once I write about two or three other Eigner-things, that presents this question front and center, I think. I’m not at home, so I can’t give the poem #, but it sticks out pretty obviously, and is in Volume IV. )

These are good questions! And I can’t wait to see his list of neologisms, not to mention his reading of a poem that uses one. As to an answer…

I wd hate to be responsible for dealing with Eigner’s typos and abbreviations in the absence of his advice.

In my experience with the prose — and Eigner was more cavalier with prose than poetry — the abbreviations were time-saving devices not meant to be retained … except with conventional abbrevs. like “wd” and the like.

But Eigner liked inventions too, and sometimes he considered the abbreviations (or typos) to be such. And he was open to suggestions. For instance, with “Blurb for Disabled Calligraphy” (in Areas Lights Heights: Writings 1954-1989), I suggested we keep his typo “mirrr” for “mirror,” and Eigner, after giving it due consideration, agreed. Of course, if I was editing the piece on my own, I’d supply the missing “o,” no question.

Another, somewhat different example that comes to mind is the poem “What Next (To Do?),” also in Areas Lights Heights. Here, Eigner mistakenly typed “philosophy” as “philosophyl.” I loved the suggestion of chlorophyll in this, and Eigner did too when I pointed it out, so he added the additional “l” to make the word “philosophyll.” In this instance, the typo was not so much preserved as used as the basis for a further revision. Needless to say, this sort of revision can only be made by an author. 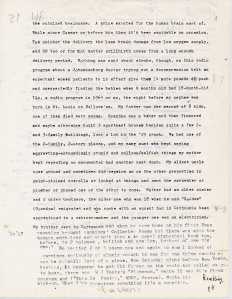 Intermediate version of Eigner's "Rambling (in) Life," showing Eigner's additions to the editor's typescript. Click on image for a larger view.

By and large, Eigner loved editing as collaboration, in the sense that he loved the relationship as much as he did the project. He was lonely! And I did think retrospectively that this gave me an undue influence, which makes me squirm a little in memory. (Maybe “mirrr” really should be “mirror”? Maybe “philosophyll” should be “philosophy”?) On the other hand, the most basic way my editing prodded Eigner to rethink his work makes me glad I got involved: I would give him neatly double-spaced typescripts of his typescripts to proofread, and Eigner would then add new writing at the end of the page, even when the text was a decade old. I enabled a revision process he couldn’t or at least wouldn’t have undertaken on his own, since his own typescripts left little or no white space to work with, and retyping would have been a horrible chore.

But all this is dancing around Fama’s question about corrections. My “diplomatic transcription” (an exact copy of the text — spelling, revision, spacing, line endings) is the right choice, perhaps, when the transcript appears alongside the original … when the goal is to aid in the reading of the original. But when the transcript is the only version available?

The Riverside Edition, coming a generation after the philosopher’s death, was proposed as an opening up of Emerson’s inner life, and it came with occasionally extensive narrative bridges. For instance, the spare entry for July 24, 1872, “House burned,” is followed in the Riverside Edition with five pages of biographical information. The Harvard Edition is scholarly, with a full apparatus. It gives us the entirety of Emerson’s “pocket diaries,” lists of readings and appointments and to-do lists and the like. (The Riverside Edition very nicely uses these to compile lists of authors or books quoted or mentioned for each year.) The Library of America Edition makes a reading version of the Harvard text, no longer identifying notebook name or manuscript page, no longer recording all the vagaries of the manuscript.

So what about Eigner? For a scholarly edition, of course, everything should be recorded, so that even if correction is made, the original can still be reconstructed. But a reading edition? Of the poems? My gut feeling is that some editorial intervention is needed. Eigner’s mind and writing have an elegance that shouldn’t be sacrificed in the name of a too-faithful transcription. The editor’s task, I should think, is to reveal the elegance of Eigner’s occasional idiosyncrasy, which requires that idiosyncrasy be distinguished from inelegance (i.e., error). Except … that acceptance of error is part of Eigner’s elegance, his adherence to thinking as a moment-to-moment engagement with language and the world. So … does that mean that error needs to be distinguished from error? Yeah, I think so. Which means, alas, that the editor, following Eigner, is apt to make errors every step of the way. A thankless task!

How easy it would for correction to get out of hand! I’m glad I didn’t have to make such decisions on my own — that I had Eigner to consult. But in bringing my decisions to Eigner, my policy, I guess, was that changes should be minimal: obvious typos needed to be fixed, but abbreviations I tried to leave as is. This then left a short or long list of puzzling words that may or may not have been typos and may or may not have been inventions, which I myself preferred to leave as is. Eigner, I found, was more inclined to normalize. With “Eureka,” for instance (see the text to the right), which Eigner and I never got around to editing, I suspect he would have seen “weiting” as an error for “writing.” But is it, in a text where “weight” and “meaning” are treated as synonyms? Perhaps “weiting” is writing that weighs meaning. And what about those typos that may be abbreviations, like “wrds” for “words” or “mch” for “much”? And what about the beauty of Eigner’s process, which the errors and corrections seem to be a part of? I mean, if writing is “rliza- / tion” and “assay, assessment,” shouldn’t we see that realizing take place, or fail to take place, as Eigner assesses his own wording, as he adds the “ings” above “thns” or fails to realize “no” by typing “np”?

It’s a puzzle, all right.